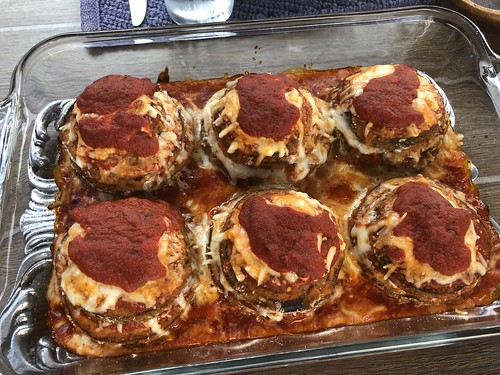 This eggplant recipe is one of the best of all Szechwanese dishes. It is also very inexpensive when eggplant is in season. Somewhat hot, this dish tastes best when the garlic is literally overpowering. If you don’t peel the eggplant, the color of this dish will be purplish.

This popular Szechuan dish is made with Chinese eggplant, which is thinner and longer than the short and thicker eggplant that is commonly available in supermarkets. Both Chinese eggplant and chili garlic sauce are available at Asian markets. This spicy side  Bring a large pot of boiling water to a boil. While waiting for the water to boil, prepare the eggplant: cut the ends off the eggplant. Cut the eggplant crosswise in half. Cut each half lengthwise into quarters. Line up the eggplant slices from left to right and cut diagonally into pieces approximately 3/4 inch thick.

Place the eggplant in the water and boil for 1 minute (start timing from the time the water returns to a boil). Drain the eggplant on paper towels. Finely mince the garlic and ginger. Finely chop the green onion. In a small bowl, combine the sauce ingredients (the dark and light soy sauce, vinegar, rice wine or dry sherry, sugar and chicken broth) and set aside.

In another small bowl, use your fingers to mix the black pepper and cornstarch into the ground pork. (The black pepper adds a bit of extra flavor and a small amount of cornstarch helps keep the ground pork from sticking). Heat the wok and add 1 tablespoon oil in the wok on medium-high heat. When the oil is hot, add the garlic, ginger and green onion. Stir-fry for 10 seconds, then add the ground pork. Stir in the chili garlic sauce. Stir-fry until the pork turns white and is nearly cooked (about 1 minute), using a spatula to break the pork into small pieces.

Add the eggplant and stir for a minute to mix everything together. Give the sauce a quick re-stir and swirl it into the pan, stirring. Turn down the heat to low-medium (about 4 on the dial), cover and simmer for about 10 minutes, until the eggplant is tender. Give the cornstarch and water mixture a quick restir and add it in the middle of the pan, stirring quickly to thicken. Mix the sauce with the other ingredients and serve hot.

Alternate cooking method: Instead of boiling the eggplant, you can stir-fry it before combining with the pork and other ingredients. Heat the wok and add 3 tablespoons oil. When the oil is very hot, add the eggplant slices. Stir-fry the eggplant for 2  3 minutes, until it begins to brown. Be sure to keep stirring the eggplant so that it doesnt stick to the pan. Press down on the eggplant to remove excess oil. Remove and drain on paper towels. Ready you are  Eggplant in Garlic Sauce.  Please visit in the site http://indomunch.com/ for extra details.